How to deal with feelings without reciprocity? A handful of supportive tips

Relationships
14 September 2022
You need about 3 min. to read this post

Not all love is happy. It happens that our feelings are not reciprocated and, contrary to appearances, such situations occur not only during adolescence, but also in adult life. How to deal with love without reciprocation?

Given the unlimited number of novels, poems and songs about unhappy love, one can make the assumption that almost all of us have experienced the pain of unrequited affection. Scientists and psychologists point out that the feelings that accompany us after rejection are actually comparable to physical pain, because, as studies show, the same areas of the brain are activated in both cases. Many people say that feeling strongly without reciprocation is one of the worst experiences we can have. But while it often seems like a tragedy, we are able to cope with it. How?

The first moments after realizing that we love without reciprocation are the most difficult, We are then accompanied by many emotions – disappointment, helplessness, sadness, anger. At the same time, we often hold out hope that perhaps all is not lost, we try to bargain in our own thoughts. We look for an excuse to continue contact with a person who does not reciprocate our affection, we send her random messages, we appear in places where she often goes, we analyze the past. All of these types of actions cause us to not only stand still instead of moving on, but also to tear our wound more. The best way to do this is to radically cut ourselves off from that person. The principle of no contact is effective and allows you to cool down after strong emotions. It can also be helpful to get rid of things that remind us of the object of our feelings, or even to delete a phone number or block on social media. The more unfavorable stimuli you eliminate, the faster you can deal with unrequited feelings.

Don’t despair, but look at your emotions

Even after radically breaking contact with a person who does not reciprocate our love, we often tend to despair. We analyze almost every conversation and every encounter, trying to find the moment when we made a mistake. It is also not uncommon for us to blame ourselves and think that if only we had done things differently, surely this person could have bestowed affection on us. Such thoughts plunge us further into negative emotions and make us feel worse. We have to accept the situation, there is no other option. Despairing for hours will not help us move on and regain joy. However, it is worth looking at your emotions and not drowning them out in toxic ways, such as alcohol. Talking to loved ones is helpful. Allow yourself moments of sadness, don’t push it deep inside yourself, as this is the only way to get away from it and finally feel relief.

Focus on self-love and take care of yourself

Despairing for lost love, we forget that it is we who should love ourselves the most and always put ourselves first. Painful experiences happen to everyone at all stages of life, so let’s learn to accept ourselves and our failures. Let’s focus on ourselves, take care of our health, develop our passions, don’t shy away from meeting friends. However, if we are unable to cope with overwhelming emotions, let’s not be afraid to seek help from a therapist. Taking care of your mental health is also a sign of self-love.

Although it is said that silence is gold and speech is silver, there is no denying that there are situations when we feel embarrassed by prolonged silence. This is most often the case when getting to know people. We suggest how to talk to newly met people.

In our daily and professional lives, we often meet people we would like to make a good impression on or with whom we would like to start building a deeper relationship. Talking to someone who was a stranger to us a while ago can be challenging. How do we find common themes and interest the interlocutor?

The art of conversation

For some people, the very thought of chatting with a stranger makes them feel weak. We fear embarrassment or how we will come off in the eyes of others. And the good news is that the art of conversation can be learned.

First of all, build your confidence and self-esteem. That way you won’t be afraid to speak up in a new group. Share your opinions and insights, don’t give up on controversial topics. Listen carefully, be sincere and open, beware of an exalted tone. Be interested in your interlocutor and his experiences, ask him questions, but avoid those that are too personal. While doing so, try to avoid expressions that may offend someone.

Also pay attention to your posture – maintain eye contact, don’t cross your arms and legs, don’t keep your hands in your pockets. If you show your interlocutor respect, you will also receive it in return. A slight smile (appropriate to the topic of conversation, of course!) won’t hurt either.

What to talk about with new acquaintances? Suggestions for topics

If we do not know someone, it may be difficult to find a common topic of conversation. When we have just met someone, we need to be much more delicate and careful than with family or long-time acquaintances. Fortunately, there are universal conversation topics that will save us when meeting new people. We present our list of suggestions.

Current situation in the neighborhood/weather

The most universal topics for conversation may also seem like the most trite ones, but a few (even obvious) sentences about the weather or the situation accompanying you (a traffic jam in the city, a renovation or a cultural event you are attending) will help break the first ice.

Another popular topic, but one with great potential. Each of us likes to spend our time in a certain way. Some love to read books and watch old movies, others can’t imagine a day without music or sports – all activities that give us pleasure will help arouse the curiosity of a new acquaintance. Or maybe you or your interlocutor have some original, surprising interests? This is a great excuse for a long conversation.

We can ask newly met people what kind of studies they have completed or what profession they have. In this way we will show interest in our interlocutors. Let’s also share our own educational and professional experiences. Discussing such topics will quickly show you whether you have something in common.

Most people enjoy exploring new places. Travel is a fairly safe topic. You can not only talk about the cities you visited, but also ask your interlocutor about his travel goals and dreams. 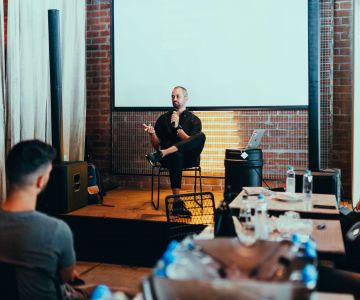 Proper communication with another human being is extremely important. Since ancient times, philosophers have asked themselves the question “how do we speak so that we are heard?” Clear and transparent messages are the basis of proper communication. A linguist, Professor Jerzy Bralczyk, is of a similar opinion.

Professor Jerzy Bralczyk in one of his lectures took up the question “how to speak so that we are listened to?”. In his lecture he raised important issues about speaking.

There is no universal recipe for speaking

There is no universal way to speak so as to be heard. Ancient philosophers pondered over this problem without coming to any concrete conclusion.

According to the professor, the lack of a universal rule of speech is not a bad thing, and setting general rules of speech could lead to manipulation or resistance to their application. Moreover, there would also be a probability of exposing the speaker to loss of credibility by following artificial rules.

Prof. Jerzy Bralczyk believes that there are three main purposes of speaking:

All these three goals are realized not only on the verbal level, but also on the non-verbal level, in gestures and facial expressions.

Combination of competence and honesty

According to Professor Jerzy Bralczyk, the credibility of a speaker can only be achieved through the interplay of thoughts and speech – then words cease to be just words. Then, they are able to stimulate the audience’s imagination and change in their heads into whole images.

Also very important in speaking is the tone of voice, which often depends on the purpose of speech.

Good communication is not only about clear and factual messages, it is also about the general attitude towards the recipient, which manifests itself in body language or voice volume. It is worth knowing that every conversation takes place simultaneously on two levels:

What do you need to remember?

1. Know what you want to communicate

Use clear and simple messages so that the recipient knows what the speaker wants to convey.

Dialogue is the basis of good communication, so give the other person a chance to speak. A conversation is not a monologue.

Do not have a negative attitude towards the conversation. Every conversation has the potential for a positive outcome.

You can always tell your emotions from the tone of your voice and the speed at which you speak – ideally, you should speak 180-200 words per minute, although of course no one can count them all the time. That’s why it’s good to just speak naturally and calmly

Gestures, facial expressions and body posture are very important in communication. Body language influences how we are perceived by our audience.